It all started with a simple goal.

Founded in 1996 with a simple goal of providing individuals and businesses with an easy, affordable, and reliable means to maintain a web presence, TierraNet has developed into a leading service provider. Standing by our goal, we are focused on providing an excellent service experience.

With a variety of value-added services, free tools, and outstanding, friendly customer service, TierraNet has maintained steady growth by relying on word-of-mouth advertising. Most of our customers have come to us based on personal recommendations from family, friends and business acquaintances who have enjoyed their hosting experiences with TierraNet.
We're here for you

TierraNet wants to be your favorite choice for web hosting, domain registration, internet access, and more. If you have questions, comments, or suggestions, please don't hesitate to contact us.

TierraNet has developed an industry leading, state of the art data center in our California office. Our customers can rest assured their services are proctected and available 24 hours a day, 7 days a week.
Cutting Edge Network Infrastructure

The APC InfraStruxure system allows us to expand our network, one module at a time, seamlessly with no interruptions and power and data are separated into separate channels to provide high quality, efficient data transfer.

The facility is kept cool with a redundant HVAC system that circulates the entire volume of air in the facility every 2 minutes.
Fully Redundant, Data Grade Power

In case of a power interruption, the electrical power is backed up by an APC UPS (Uninterruptable Power Supply) that can keep the system running on batteries for about 8 minutes. After battery power, a Katolight generator kicks in with fuel reserves sufficient for full 5 days, and with live refueling capabilities can sustain the data center forever.
Security

Our facility is secured with alarm systems and multi level access control. The flooring is anti-static to ensure the safety of the equipment when handled by technicians.
Fire Control Systems

An FM-200 gas fire protection system protects our hardware, with second stage backup fire suppression. The FM-200 clean fire suppression agent does not harm the ozone and has no cleanup time which eliminates costly downtime.

San Diego
Our state-of-the-art data center, located in San Diego County, offers a strong, reliable foundation on which our services are based.
With a OC-48 fiber optic backbone, we are connected via multi-homed gigabit ethernet connections with over 300 high end business class servers.

Los Angeles
We are backed and hosted at one of the largest co-hosting facilities in the US, residing side by side with equipment from other major carriers. Should there be a catastrophic event an automatic handoff to the this facility kicks in, and the operation seamlessly moves itself to the second site.

Hosting
We make web hosting easy and affordable for you.

From personal hosting, small and medium business website hosting to ecommerce-enabled store hosting, we offer multiple hosting plans focused on getting you the best solution for your hosting needs. Our state-of-the-art data centers provide 99.9% uptime and our world class customer support is available 24/7 365 days a year, ready to offer service anytime you need it. We also offer email only hosting and dedicated servers.

Shared SSL Certificate
Use our SSL certificate on your hosting to secure your URL and get the benefits of SSL without the costs associated with setting up an SSL server.

Webby
TierraNet's online web editor makes it easy to manage your web site files without the need for special software.

Spam Protection
Trap or discard more than 99% of your unwanted email using our free, easy and flexible spam filters.

Dedicated servers provide you with additional flexibility, and additional CPU and bandwidth capacity over our standard hosting plans.

Control panel configurations do not have root access.
Hosting Packages

Multiple hosting packages: Email only, UltraLite, Lite and Professional can be hosted on a single machine. Each additional package is $2.00/month (plus bandwidth charges).

Premium and Ultimate accounts can be hosted for $30/month (plus bandwidth charges).
Without Control Panel Configuration

*Any licensing fees to be paid by customer.
Data Center

The TierraNet data center includes proven power protection with UPS and a diesel generator capable of handling power-outages of up to 24 hours in length. Our network uptime over the last 18 months has exceeded 99.9%.
Reliability

TierraNet proactively monitors hardware, typically identifying problems before they occur. All dedicated servers include daily tape backups, and since hardware is owned by TierraNet, downtime is minimized in the event of a hardware failure.

Dedicated servers, like our production webservers, are monitored by a live person 24 hours per day. Should the need arise, dedicated server customers can contact the TierraNet NOC (Network Operations Center) to reboot servers, or provide technical support. TierraNet offers a unique level of customer service which you won't find with many providers.

When bandwidth exceeds 1Mbps, the customer may elect to switch to 95th-percentile billing per megabit ($199/Mbps/month). 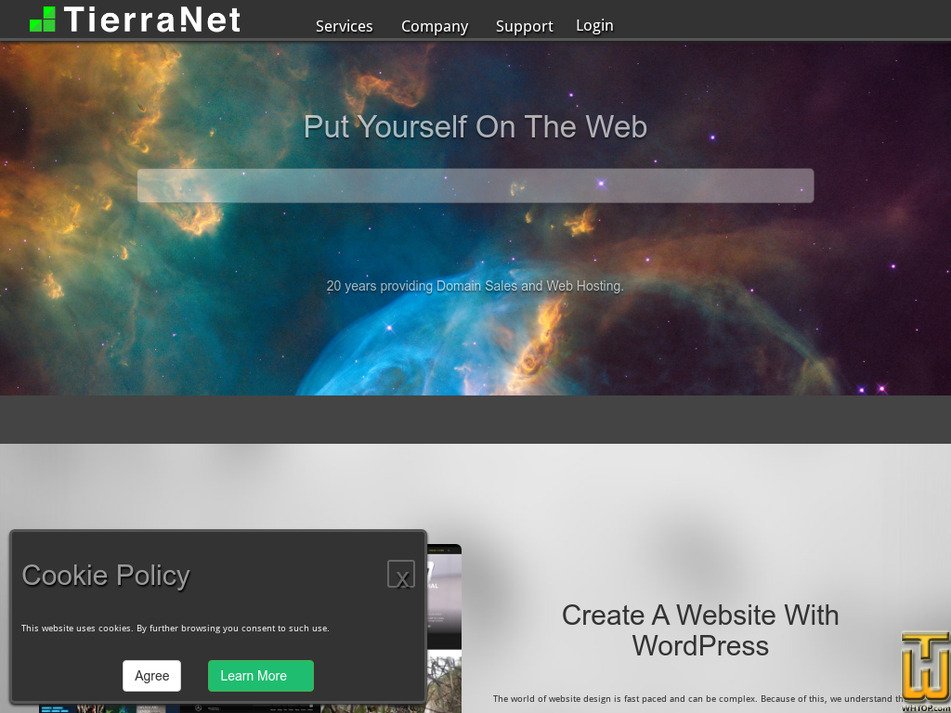 Website research for Tierra Net on February 26, 2018 by WebHostingTop

Netcraft measures and makes available the response times of fifty leading hosting provider Web sites. The performance measurements are made at fifteen-minute intervals from four separate points around the Internet. ...
[search all tierra.net news]

The quick stats of Tierra Net profile shows a note average of 3.9 out of 10, counting 10 opinions. (few listed on the top of the page)
As visitor you can rate this provider directly here! If you are part of support team, you can respond to these reviews by going to login

The e-mail messages are sent to one member at a time, a minute apart over a few hours. Each month, some of those announcements bounce with an error message indicating that it was rejected by the addressee's server because one or more of Tierranet's e-mail servers (provided with our hosting package) are on some kind of spam blacklist or other.

InMotion Hosting
These Tierra Net customer review(s) and ranks are the subjective opinion of our visitors and not of whtop.com staff.
Trademarks, logos & names are properties of their respective owners and protected by law.