-anonymous- (-hidden-)
Time Hosted: under 1 month
Global rating
My need was to buy and manage some domains for both professional and personal use, and after a significant amount of research I settled on Hostpoint. The deciding factors were that it must be based in Switzerland, must have a good control panel (primarily for DNS), the control panel must have an English option (my German, French, and Italian are all pretty bad), must have private registrations, and should have reasonable prices.

Hostpoint hit all of those nicely. There are cheaper Swiss-based registrars, but Hostpoint was about average price-wise. Their control panel for managing domains is at worst decent, and in quite a few places good.

In very short order I was able to set up an account, purchase a handful of domains, and get them configured without any assistance from a human being at Hostpoint. The interface was perfectly clear and usable.

> terrible control panel ( it is very limited, any issue you will need > to contact their client support which will respond you after 1-2 days)
> Impossible to work with Client Support.... they will need an improvement on this side... very long waiting times.. and taking into account that not all issues could be resolved in one reply it could take a really long time in order to do something....
63 out of 73 users found this review to be helpful!
Did you find this opinion useful? YES / NO
MORE REVIEWS

Hostpoint – The leading Swiss hosting and cloud provider
With 20 years of experience, Hostpoint is the largest web hosting provider in Switzerland. Hostpoint offers simple solutions from a single source – for domains, websites, web shops and e-mail. As a leading, ICANN-accredited domain registrar, Hostpoint manages around 800,000 domain names. With its ultra-modern infrastructure and servers based in Switzerland, Hostpoint ensures the stable operation of around 300,000 Swiss websites every day. The best support service in the industry provides individual, professional and efficient customer support in four languages, 365 days a year. The 100% owner-operated company based in Rapperswil-Jona SG employs 75 people. 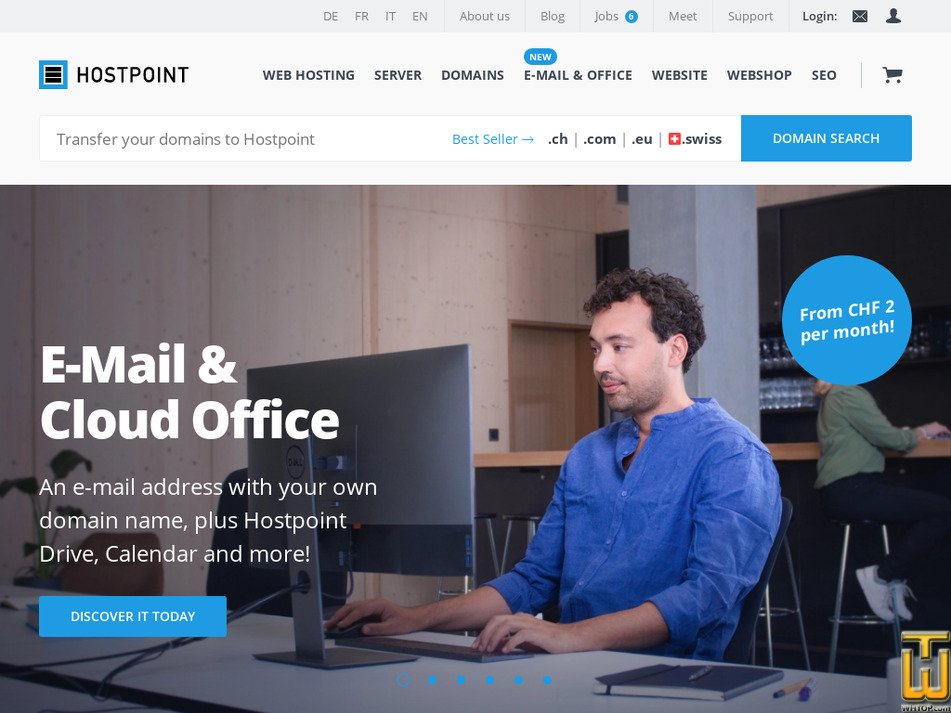 Strong Growth at Hostpoint Continues - Hostpoint, the largest web hosting provider in Switzerland, continues to show strong growth: 11.4 % increase in turnover to hit the CHF 11.7 million mark during the last fiscal year. This translates to steady double-digit growth much like in recent years.
Hostpoint, the web hosting provider based in Rapperswil-Jona, increased its turnover during the last fiscal year to CHF 11.7 million, which is an 11.4 % increase over the previous year (CHF 10.5 million). At the end of 2014, Hostpoint was the ...
CM4all Helps Hostpoint Add Languages - Swiss Web hosting provider Hostpoint AG (www.hostpoint.ch) has launched its "web-o-mat" version of CM4all's (www.cm4all.com) the website building software in three additional language versions.
According to Hostpoint's Friday announcement, more than 35,000 of 55,000 Hostpoint customers are using the premium CM4all website builder and with the launch of French, Italian and English versions, Hostpoint will be expanding its market presence in Switzerland, which has four official languages. "In ...
Hostpoint to Use Open-Xchange - Open source email solutions provider Open-Xchange (open-xchange.com) announced on Wednesday it has signed a new strategic partnership with Switzerland-based Web hosting provider Hostpoint (hostpoint.ch), helping to push Hostpoint into the software as a service market.
Later this year, Hostpoint will replace the Web mail system for its 250,000 email accounts with a new Web mail module from Open-Xchange, which uses an innovative AJAX Web interface to deliver new features and improved usability. ...
[search all hostpoint.ch news]

The quick stats of Hostpoint profile shows a note average of 3.8 out of 10, counting 4 opinions. (few listed on the top of the page)
As visitor you can rate this provider directly here! If you are part of support team, you can respond to these reviews by going to login

gaminch (aznmuscle75@h...) / alexfrei.ch
Time Hosted: 6 mo. to 1 year
Global rating
Features
Cost
Customer Relation
Control Panel
Hostpoint is sucks!
This hosting is the worst ever I have been. Since I moved my sites there I have been experiencing problems, one after another. Few months ago they decided to update to php 5.3, althought some of my sites support php v 5.3, they didnt work anymore after this upgrade. Search on internet before you plan on using hostpoint...there are bad review of them everywere!
Dear gaminch, with regards to your post on the experience you've had with our hosting service, we would really appreciate it if you could contact us directly to clarify the situation. We apologize for any inconvenience you might have experienced. It is important for us to understand your concerns and learn from them. Our contact details can be found here: http://www.hostpoint.ch/en/hostpoint/contact.html.
Customer service representative (thomas.bruehwiler@h..., Jul 5, 2012).
87 out of 100 users found this review to be helpful!
Did you find this opinion useful? YES / NO

Cloud Sigma
These Hostpoint customer review(s) and ranks are the subjective opinion of our visitors and not of whtop.com staff.
Trademarks, logos & names are properties of their respective owners and protected by law.