I prefer no to leave reviews when I'm angry. I ussually don't bother to leave reviews at all. But few seconds ago was my last drop.
I moved to Zurich 3 weeks ago, and now almost a month later still no wifi or TV, and I'm paying them 99CHF

I moved to a flat where previous tenant already had a contract with them. I wanted to make a new one instead (cheaper, for under 25), but apparently I have to give 1000 chf deposit because I'm a foreiner on L-permit, I'm sorry I'm not a billioner and I don't have a 1000CHF just lying around to give them to Swisscom just like that.

Then I was trying to switch to another provider (Sunrise, lovely customer service and way cheaper), but even terminating contract with Swisscom would have been pain in the a**. (Like a bad boyfriend, I swear, acts like an a**hole but doesn't let to break up)

And now I'm stuck trying to figure out the password for Wifi, because after many emails to the previous tenant and IT [read more...]
70 out of 75 users found this review to be helpful!
Did you find this opinion useful? YES / NO
MORE REVIEWS

Swisscom is Switzerland's leading telecoms provider, with 5.9 million mobile customers and around 1.6 million broadband connections. In the first half-year of 2011, the company's 19,829 employees (full time equivalents) generated revenues of CHF 5.7 billion. 837 young people complete an apprenticeship at Swisscom in the fields of IT, telematics, mediamatics, retailing and commerce.

Note: Only allow customers from Switzerland and few other countries !

Swisscom has a presence throughout Switzerland and offers a full range of products and services for mobile, landline and IP-based voice and data communication. Massive investments in network infrastructure ensure that this will remain the case in the future. With Swisscom TV, customers too have become increasingly aware of the trend towards multimedia. Swisscom is active in one of the most attractive broadband markets in Europe via the Italian provider Fastweb. Swisscom also offers services for IT infrastructure outsourcing as well as the management of communications infrastructures.

Swisscom fosters close ties with its target groups - shareholders, employees, suppliers, the public and, above all, its customers. Swisscom offers them

- Everything they need
- Simple, one-stop solutions
- Unbeatable quality and service

With initiatives such as Swisscom Help Point and Internet for Schools, Swisscom is helping to shape the information society in Switzerland. And as a partner of Solar Impulse, we underline our commitment to sustainability and innovation.

The history of telecommunications in Switzerland began 150 years ago and it is here that Swisscom has its roots. The history of Swisscom is a success story spanning three centuries.

1. January 1998
Liberalisation of the telecommunications market in Switzerland and the EU; Swisscom becomes a public limited company.

1998
On 5 October the Federal Council approves Swisscom IPO.
"The blue window" registers 154,000 online subscribers and is integrated into Swisscom.

In the coming years, Swisscom will invest billions of Swiss francs in the Swiss Telekom and IT infrastructure. This will include the expansion of both the optical fibre networks and mobile broadband, as well as the construction of the All-IP infrastructure. In addition, Swisscom assumes responsibility for Telekom's basic service provision, which we secure on behalf of the federal government.

With Swisscom as your provider you have the choice between four different hosting options for your website. These each include a given amount of memory, webmail, simple registration of domain names, daily data back-up and 24-hour support 7 days a week. Your website is in excellent hands on the Swisscom server. You can choose the Webhosting package with the amount of memory and number of e-mail accounts to best suit your needs.
The advantages of Webhosting:

Hosted Exchange Professional
Outlook without your own server


Using Hosted Exchange Professional, you can benefit from all the functionality of Outlook without the need for your own server. You and your employees can access e-mails, calendars, address books (contacts), tasks and notes from any location. The exchange and backup of your data is run on Swisscom’s Exchange Server 2007. Encrypted and protected by regular backups. Hosted Exchange Professional keeps you informed automatically about everything that is going on. This way you are always up-to-date wherever you happen to be.


The advantages for you of Hosted Exchange Professional:

Secure access to e-mail accounts, calendars, tasks and contacts irrespective of location
No need for your own server
You can retrieve all the latest Outlook data on your mobile devices (e.g. laptop, mobile phone)
Effective teamwork thanks to coordination in real time
Free set-up of e-mail distribution lists
Mailboxes for the management of car parks and conference rooms
Team mailboxes: single e-mail address for external communication – effective control of internal e-mail processing and deputisation rules
Automated backup and encrypted data transfer for comprehensive security
Free access to Microsoft Outlook 2007/2010
Hosted Exchange Professional from CHF 14.00 per month

What you need
Would you like the peace of mind that comes with knowing that your servers or server farms are in the safe hands of external professionals? Do you need a stable, broadband national and international Internet access that is never overloaded, always available and of course not subject to time or volume limits? Do you want to calculate your costs precisely every month?

What we offer
With Telehousing metro, you get a high-security environment for your servers in your own computer room (private room) or individual rack in a Swisscom shared rackroom. The room is protected from unauthorised access using electronic and biometric systems. Every computer room is designed as a separate fire compartment with a fire alarm system, including an early warning system and modern firefighting equipment. The energy and communication channels (2-way) and the climate control systems are designed redundantly. You save money because with Telehousing metro, you do not have to invest in either premises or personnel.

Services at a glance

The availability of the power supply is up to 99.995%.
Fire early warning system and modern firefighting equipment.
Energy supply, air conditioning and access control systems are monitored round-the-clock by the Swisscom control centre.
Individual solution with regard to size, features and energy density.
Remote services can be configured according to customer wishes.
Power 100% from renewable energy.

Cloud Services - Use IT services instead of investing
It is not easy for SMEs to keep up with the rapid development of IT. Time-consuming software updates or server capacity bottlenecks are just two of the many challenges that you are probably facing.

Swisscom offers you the opportunity to obtain business software or comprehensive server packages via a flexible service. You only pay for what you actually need and, at the same time, you will be spared IT maintenance tasks.

Your benefits with Swisscom Cloud Services:

Our services are modular in structure and can be adapted to any size of business.
We would be pleased to support and advise you as you seek the best possible cloud-based IT services for your company. You can find more information about these services on the product pages.

Software as a Service (SaaS): flexible access to business software for communication and cooperation:

use Outlook without your own server: Hosted Exchange Professional
exchange documents wherever you are: Shared Office Professional
complete solution for mobile cooperation: Microsoft Office 365
data security on a Swisscom server: Online Backup Professional

Infrastructure as a Service (IaaS): flexible access to server capacity

Platform as a Service (PaaS): flexible access to server capacity and operating systems 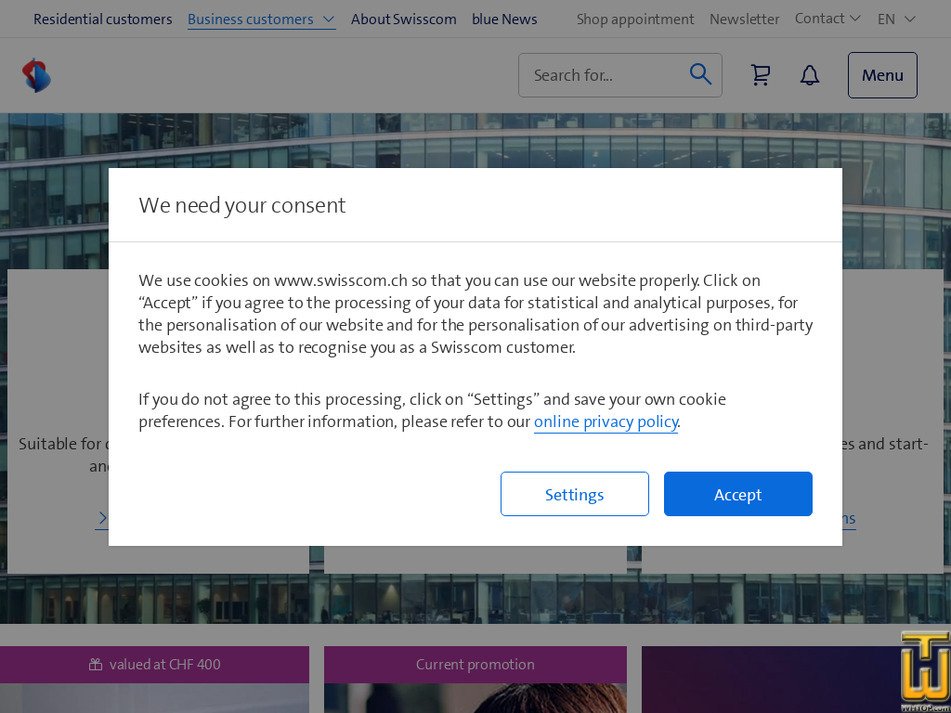 https://twitter.com/Swisscom_B2B_en
Welcome to the official Swisscom Business Channel. We answer your questions Monday to Friday during business hours.
Account started from March, 2011, having already 1002 tweets with 3378 followers and 347 friends. Last activity on March 5, 2021. See recent tweets:

March 5, 2021 - Fraudsters are currently sending a large number of SMS messages and emails indicating that a bill has been paid twi… more info
February 23, 2021 - We are movingWe are merging our twitter profiles. As of march 1st, you can find us on @Swisscom_B2B. more info
December 10, 2020 - Swisscom Ventures is proud to back the exciting technology development plan of #StartUpChallenge 2019 winner… more info
https://www.facebook.com/Swisscom/
Swisscom account is having very many likes, talking about them lots of people. Last activity on Sep 30, 2019.

The quick stats of Swisscom profile shows a note average of 1.0 out of 10, counting 2 opinions. (few listed on the top of the page)
As visitor you can rate this provider directly here! If you are part of support team, you can respond to these reviews by going to login

Ana Pita (anadesousapita@h...)
Time Hosted: 1 to 2 years
Global rating
Features
Cost
Customer Relation
Control Panel
Terrible costumer service!
This company is an absolutely joke! I had my card blocked because of a delayed bill. First it took them a week to understand why the card had been blocked in the first place. I paid the bill, one week later my card is still blocked! I have been calling everyday, more than once a day and every time someone gives me a different information. Even though the payment had gone through, somehow they couldn't find it! So they asked me for a proof of payment. It is now the third time I send them that proof of payment and there is always a problem! The hotline is absolutely useless. I just kept been tossed around from one person to the other and no one could solve the problem! Two weeks later I still don't have a card and the both the hotline and the finance department can't solve the situation! Completely fed up with it, I would have left swisscom by now if the cancellation fee wasn't so ridiculously high!
58 out of 66 users found this review to be helpful!
Did you find this opinion useful? YES / NO

Cloud Sigma
These Swisscom customer review(s) and ranks are the subjective opinion of our visitors and not of whtop.com staff.
Trademarks, logos & names are properties of their respective owners and protected by law.