Quite many peoples asked to get some feedback from our end. Since we do now many other things, we decided to share some of the stuff we experiment.

So, recently we got a problem with a router Asus RT-N65U (same issue is reported on other models, like: DSL-N55U)

The problems started once logged on the rooter (via web interface, usually something like 192.168.1.1) and clicking on the “USB application” (left menu)
There was a link closed to “Media Server” which mentioned that there is a new version and a link to update.

Once clicked the update link, the old version of MediaServer has been uninstalled and the new one started the installation process. Unfortunately the process stopped with an error, like “Failed to upgrade the application. This may be caused by an incorrect file or an error in transmission.” Retrying after that, ended with other error like “Enable Error”. 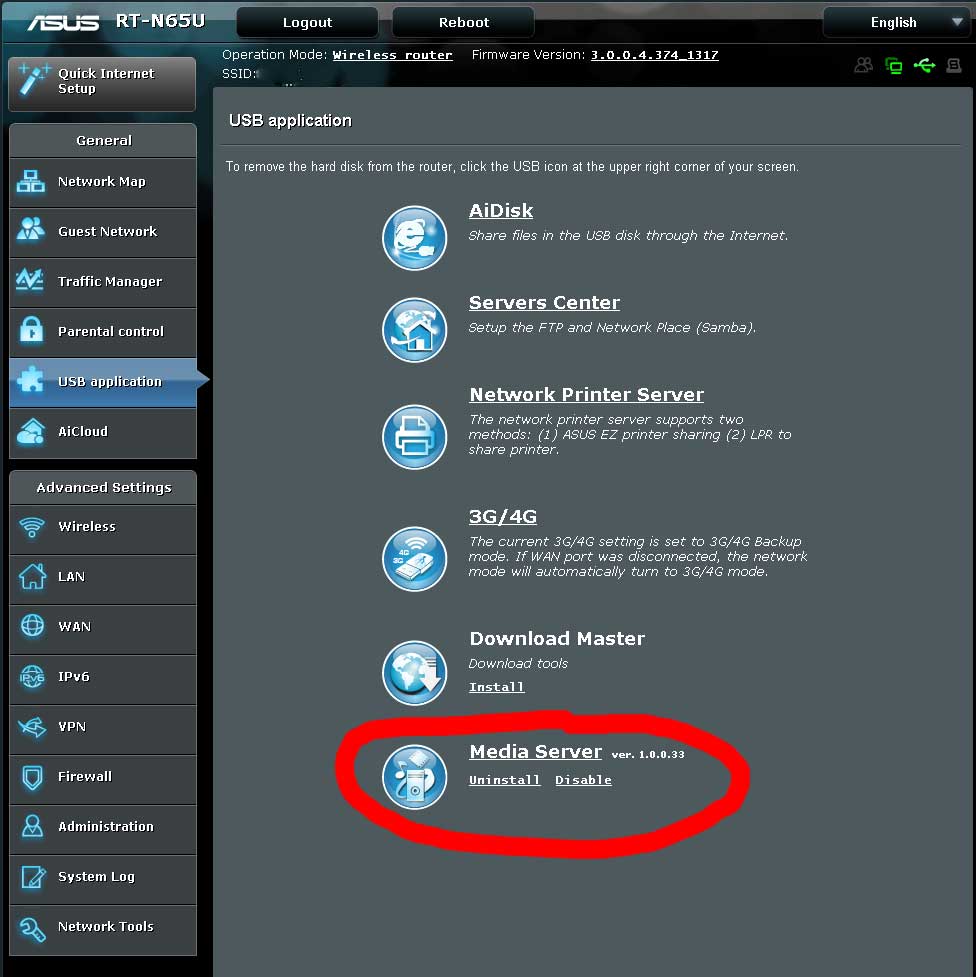 So, here is the solution (we don’t guarantee that will work for anybody, worked for us, so use at your own risk)

A Media Server can help you share your content using DLNA. Many peoples are using such application for their TV's. For Samsung TV's, phones, tablets a new version of Samsung AllShare has been recently released, called Samsung Link

You can optionally use another firmware for a Media Server working for ASUS RT-N56U/RT-N65U which is really nice.

i didn’t update router FW, i tried only the steps from renaming asusware folder and reinstalling apps. DM worked but Media Server not. :(

Same problem for me.
I have the correct FW version as mentioned on this page, deleted asusware directory and all strange files. Still same problem on my WD Passport. It worked on an earlier FW version, but not anymore. Very frustrated now…

I got another problem since I’ve made the mediaserver update.
I can’t find ALL entries with my DLNA Hardware. Doesn’t matter if I use TV, AVR, Smartphone, Tablet. I have 5 main folders on the external HDD. Per DLNA I only find 2! but per PC or Android tools I can see the 5 folders…
The next problem is, If I upload data to the external HDD I don’t find it per DLNA, just with the PC etc… That`s really disappointing…

This worked perfectly for me!! The following are the steps I took.

1) I unmounted the drive using the Asus app.
2) plugged in the USB drive to a laptop
3) Manually removed all the var.txt files and renamed the “asusware” directory to “asusware_old”
4) Plugged in the drive to the router
5) Waited for the drive to connect (Mounted) in the Asus Network Status panel
6) Installed “Media Server” under the USB screen
7) Set File Directory and waited for it to finish scanning the directory

Thank you for your advice, this helped a lot.

thanks a lot. I had the same problem like many others with the RT N56U media server with the latest FW. Did the same as per the instructions – deleted the files from my hard disk and attached it again. It is working well now. Able to stream movies from the router to my TV via AppleTV.

Hopefully this will work. Had a lot of struggle and wasted time.

A big thank you

Good to see Asus are keeping on top of this and all the other replies on the net.
Oh no, wait… they couldn’t care less, that’s what it is!

Thanks for the great support and guide, same fix worked for ASUS DSL-N12U_C1, after doing so many changers I was able to fix the issue because of you guys. Thanks a lot.