OVHcloud US Recognized by Forrester Research for Its Private [...]

OVHcloud US Recognized by Forrester Research for Its Private Cloud Services 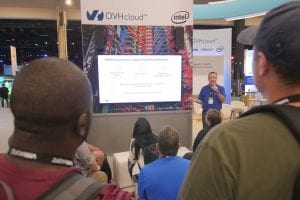 Company: OVH
Want to add a website news or press release ? Just do it, it's free! Use add web hosting news!

Mar 5, 2019 - OVH Expands Public Cloud Regions in APAC - OVH, one of the world's largest cloud providers, has expanded its Asia-Pacific (APAC) cloud reach with the launch of two datacenters in Singapore and Sydney respectively. The new OVH data centers located in Singapore and Sydney will increase the total number of OVH Public Cloud locations from six to eight, spanning four continents.

Businesses in the APAC region would now be able to enjoy improved resilience, better connection speeds and faster data transfer. The expansion would also reward customers in Europe, Middle East and Africa (EMEA) with the capability to deploy public cloud resources in APAC.

Octave Klaba, CTO/CEO and founder of OVH Group, one of the world's largest cloud and web hosting companies – of French origin, has appointed Michel Paulin as Chief Executive Officer (CEO) of the OVH Group. Michel Paulin will lead the execution of OVH's "Smart Cloud" strategic plan, which aims to consolidate OVH's role as an "alternative" leader in cloud.

Michel Paulin has spent most of his career in the IT, telecoms and Internet industries. He was CEO of Neuf Cegetel, for which he led the IPO, Méditel (now Orange ...
Mar 16, 2017 - Russel P. Reeder Named CEO of OVH US - The French web hosting company OVH Group just announced the naming of Russel P. Reeder as the CEO and President of the U.S. subsidiary OVH US. The expansion of the hosting group comes after raising $250 million from TowerBrook and KKR in investments last year. They also announced the construction of data centers in Hillsboro, Oregon and Vint Hill, Virginia.

Reeder worked at Media Temple in 2015 and left after the company was integrated with GoDaddy. He co-founded the app icitizen and served as CEO of the app until November ...