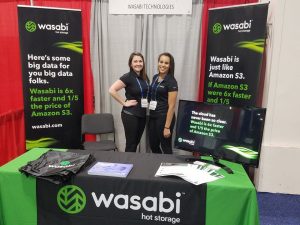 July 6, 2018 - Wasabi (wasabi.com), a privately held company based in Boston, Massachusetts, on a mission to commoditize the storage industry, has announced the opening of its newest data center in Hillsboro, Oregon.

By expanding its geographic footprint to the U.S. West Coast, Wasabi's storage customers in Hollywood and Silicon Valley, as well as an expanding presence in the Asia-Pacific region, would now have closer proximity access to Wasabi's "hot" cloud storage services. These customers would be able to store their data at low cost and with high speed-levels but without additional egress fees.

Company: Wasabi
Want to add a website news or press release ? Just do it, it's free! Use add web hosting news!

Nov 24, 2021 - Cloud Storage Firm Wasabi Technologies Opens London Storage Region - Wasabi Technologies, a global cloud storage company, has opened a storage region in London, which will increase the availability and performance of its storage services across the United ...

Jul 2, 2021 - Managed Hosting Provider Steadfast Partners with Wasabi - Steadfast, a pioneer in sophisticated cloud consulting, engineering, and managed hosting for over 20 years, has teamed up with Wasabi Hot Cloud Storage. Wasabi would help Steadfast deliver "low cost, fast and reliable" cloud storage with no fees for egress or API ...