I have hosted there about 7 months and in this time i had always a high uptime. Most reviews on this site are FAKE reviews - i know it!

The hosting company with the Hosting 2x4 trademark was founded in 2004 to support its own web projects. After 10 years, the services of our company have significantly expanded, we provide hosting and virtual servers, and dedicated servers, and register domain names, as well as a lot of related services.

At the moment, among our clients there are both representatives of small businesses (startups) and very serious corporations. Everyone can become our client! We have expanded our scope of activity to the European market, focused on the quality of services provided and support. 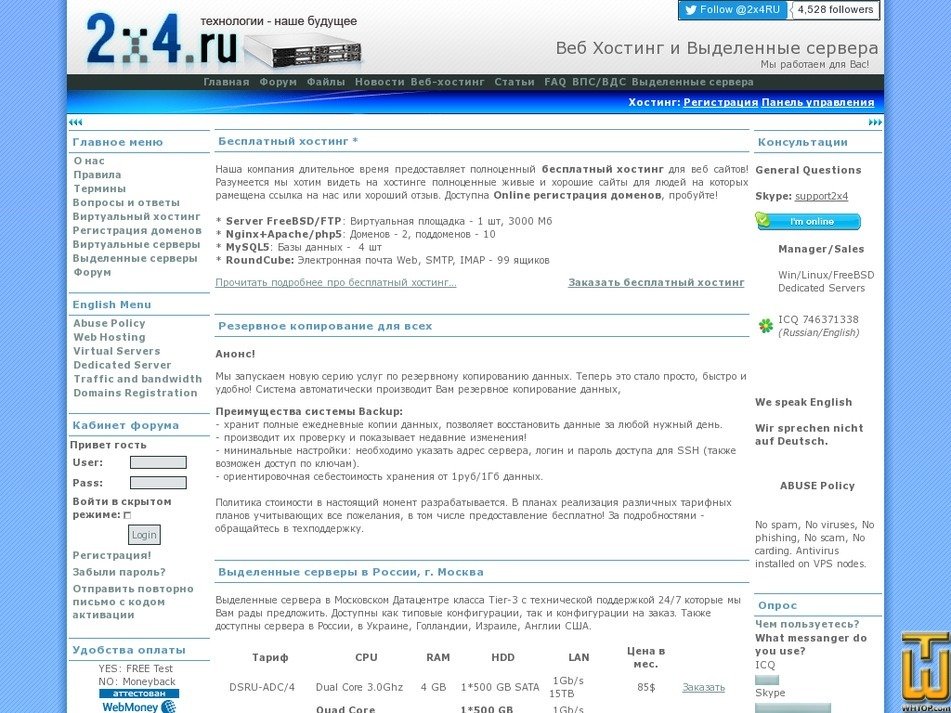 LUCIFER @ zion-network.net (admin@z...) / zion-network.net
Bekletilen Zaman: 2 ila 3 yıl
Global değerlendirme
özellikleri
Maliyet
Müşteri ilişkisi
Kontrol Paneli
2x4.ru is the best offshore hoster !
first i want to say that the other guy which wrote that he would be from "zionnetwork" was a FAKE, probably a hater, which tried to DDoS us and gave up unsuccesful. ;)


here now my review (excuse my bad english, thanks):
Many of my projects the last years i am hosting with 2x4, they never disappointed me.

their range of products to choose from is huge, for all kind of purposes you can find the right hosting plan. the uptime is very high (approx. >99,99%). if they dont have something fitting to your purposes on their website, they can give you individual offers.

the ddos-protection is one of the best on the international market for this price and without a question the best for projects which need high data-security ("offshore").

administrator of 2x4.ru is a corrupt cop which sell all your datas for little bit money.

I spoke sometimes with Yuri, the owner of 2x4.ru, he is a really corrupt admin. You can buy at him (THE OWNER!!) private datas and scripts from other customers.