ZAMNET Communication Systems Ltd was established in 1994 as Zambia’s first Internet Service Company and one of the first in the Sub-Saharan Region and is fully owned by the University of Zambia (UNZA) . Over the years, ZAMNET has gained a vast amount of experience in delivering quality service to its ever-growing customer base. and currently has five (5) full Points of Presence (PoPs) in Lusaka, Kitwe, Livingstone, Ndola and Solwezi, and eight (8) virtual PoPs, in Kalomo, Mazabuka, Choma, Lumwana, Luanshya, Chingola, Chipata, Kalulushi and Chililabombwe. 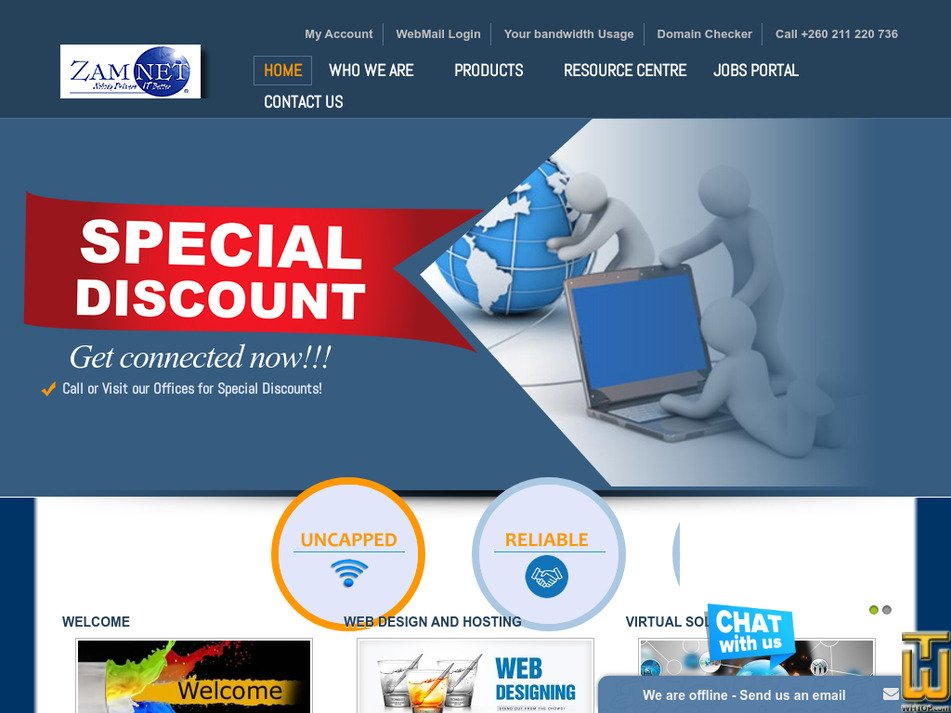 Zambia's Biggest ISP Hacked - According to reports on Zambia-focused news site LusakaTimes, the country's "leading Internet service provider" ZAMNET's (zamnet.zm) website was hacked into on Saturday, but has since been restored.
The security breach is believed to have occurred on Saturday afternoon by a group of hackers called 3RqU (Turkish), which according to the report, are a "known notorious group of hackers."
During the breach, the hackers changed ZAMNET's landing page as well as gained unauthorized access to the ISP's servers, enabling them to obtain root access to the site. However, it is unknown how much real damage the hackers actually caused during the incident.
Fergie's Tech Blog posted a detailed screenshot of the hacked landing page here.
Major news sites hosted by ZAMNET were also said to have been affected by the security breach, including Times of Zambia, The Daily Mail and ZNBC TV.
Lusaka Times also noted that at the time of the hacking, ZAMNET was running an old version of Apache web server, ...
[search all zamnet.zm news]

100%
Our company, which started its activities in the internet informatics sector in 1998, took the trade name "Karegen Bilişim LTD" in 2002 and started to produce new software on the internet. Karegen Ltd has been registering Domain, Web Hosting and SSL worldwide since 2003 through the Karegen.com [...]

100%
App Web Information Technology Network is a provider of domain registration and hosting services and web design according to global standards. The host's web servers benefit from the latest technology in terms of software and hardware, so you will get what you expect from your website with us. The [...]
Dinamo-TR Alexa Rating5,936,013▲3,613,730

Things to do
✗ Forum, Blog/Announcements, Knowledgebase or FAQ URLs are missing
✗ Products (plans) are missing
71%
Having started its activities in the IT sector in 2007, Dinamo has become one of Turkey's leading companies in the sector with its strong infrastructure, dynamic and innovative technical team and visionary management. Aiming to provide uninterrupted, fast and reliable services to its customers [...]
GarmTech Total Reviews: 3
Average Rating: 4.7 / 10
Good Reviews: 1
Bad Reviews: 2
Official Responses: 2 Alexa Rating1,627,877▼-1,188,809 Domains569

100%
Garmtech.com - hosting company with extensive experience in the IT world, provides virtual hosting, VPS, and domain registration. When choosing service plans, you can count on Linux or Windows OS, and there is also a special plan for WordPress. Even when ordering a virtual hosting, the client's [...]
Kimia Host Alexa Rating129,541▼-10,894

Things to do
✗ Facebook account is missing
86%
Kimia Host is a provider of domain registration services, web hosting, e-commerce, dedicated hosting, virtual servers, dedicated servers and other hardware and software services and infrastructure in accordance with global standards. All Kimia Host servers benefit from the latest technology in [...]
Trademarks, logos & names are properties of their respective owners and protected by law.