Rackshare provides you a share of the rack, high-quality web and mail application hosting and support, freeing you to concentrate on your web presence and your business.
Whether you're a web consultant or designer, a small business looking to create or expand your web presence, or an experienced corporate webmaster, Rackshare can provide you with easy-to-use, fully supported solutions to grow and manage your Website.

Rackshare understands that your primary focus is to serve the needs of your customers by building your web presence and managing your business, not to spend hours wrestling with the particular configuration of your web hosting company's virtual web servers. 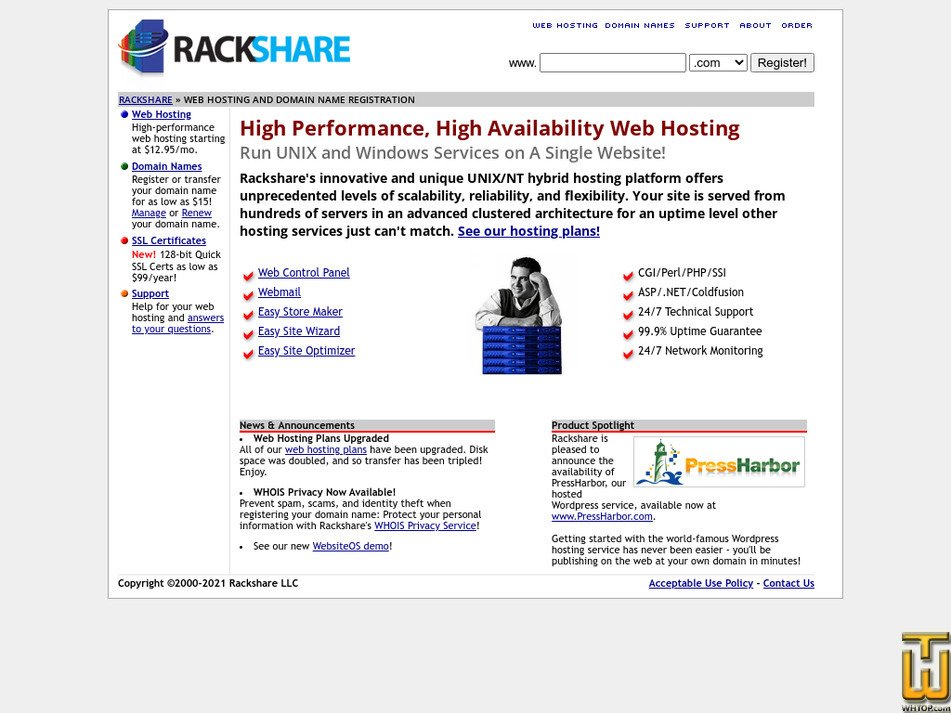 "Our resellers count on us to enable them to capitalize on profitable markets," said Elliot Noss, president and chief executive officer of Tucows Inc. "Weblogging has emerged as a rapidly growing segment of the Web publishing market. Our goal was to create an easy-to-use application for the customer specifically designed to be retailed by service providers. We used an extensive beta program to gather market intelligence and fed that information directly to the service developers. As a result, Blogware is a mature service our resellers can leverage to capture first-mover-advantage in this emerging market."

Blogware, a turnkey service, makes it easier for Internet users to publish online with its drag and drop ...
[search all rackshare.com news]

Things to do
✗ Twitter account is missing
✗ Forum, Blog/Announcements, Knowledgebase or FAQ URLs are missing
71%
Metrabyte Cloud Company Limited has been in business for more than 10 years.We have our own IDC located on the 18th floor, CAT Tower, Bangrak, providing Cloud Hosting , Cloud VPS , Colocation , Dedicated Server and ICT Solutions with a subsidiary of Metrabyte. Data center Co., LTD and [...]

Things to do
✗ Twitter and Facebook accounts are missing
✗ Forum, Blog/Announcements, Knowledgebase or FAQ URLs are missing
71%
For over 20 years we have been focusing on and developing internet services. Aim to expand its service to cover all over the country continuously. With a one-stop service and expanding channels of use The unity of technology and leading-edge service Until it has gained the trust of many [...]
SERVER1.ge Alexa Rating0

100%
Chaiyo Hosting Company Limited, we are the leader in providing Web Service, E-Marketing Service and System Customization and Integration Service. All needs of all types of SMEs with the objective of providing businesses Benefit from information technology That is changing rapidly all the time, [...]
Storm.ca Alexa Rating1,253,123▲209,177

Things to do
✗ Forum, Blog/Announcements, Knowledgebase or FAQ URLs are missing
86%
Storm Internet Services is not your regular internet company. We have a strong commitment to each and every one of our customers, a local call center, and professionally trained technicians. Learn more about us below! Storm opened its doors in Ottawa in June 1996 and was originally founded by four [...]
Trademarks, logos & names are properties of their respective owners and protected by law.