Network EQ provide high-quality, reliable hosted web and messaging services backed by effective support at highly competitive prices. Whether you want hosting for a single site, a single Microsoft Exchange mailbox, a reseller plan, a virtual private server or a dedicated server for your web design agency or just domain name registration, we can help.

We run both Windows 2003 and Redhat Enterprise Linux HP servers and Cisco firewalls to give a network and service without compromise, and offer support 24/7 to keep your sites running and data moving. 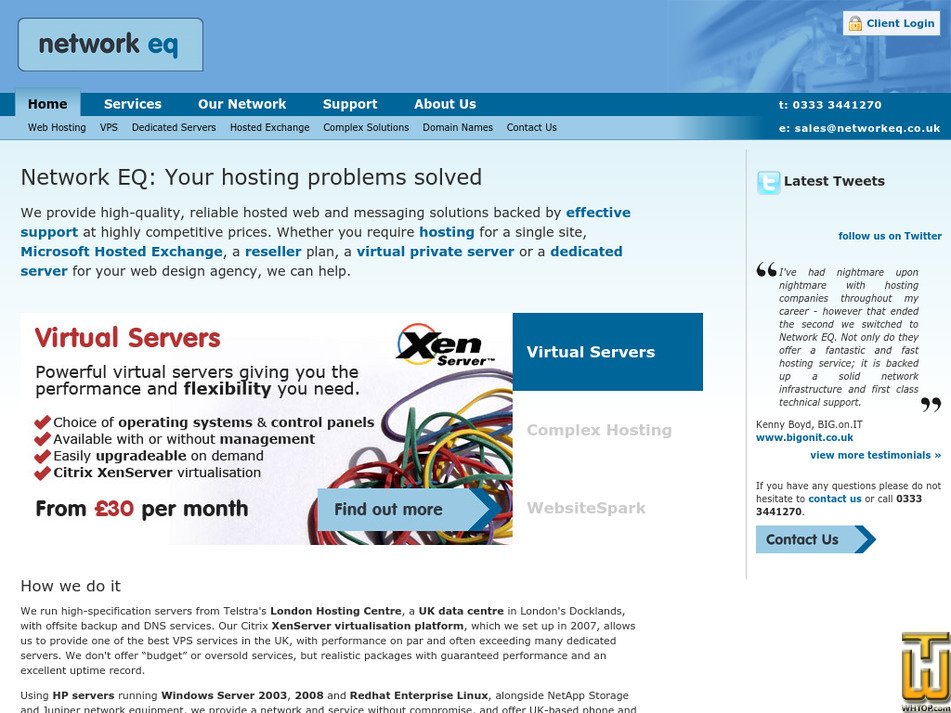 Website research for Network EQ on October 27, 2008 by WebHostingTop

Network EQ select NetApp for Storage Upgrade, Improve VPS Reliability and Performance - Bristol, 26 January 2009 - FOR IMMEDIATE RELEASE
Network EQ (networkeq.co.uk) today announced the successful implementation of a new NetApp FAS 2000 series Storage Area Network at their primary London site. The selection process for the upgrade, which began in Summer 2008, was started when the company realised that local storage on its blade servers was holding back growth.
The new SAN will start with over 3TB of raw disk capacity and can grow to over 20TB, and will be used with the company's existing HP Blade Server environment, which runs the Citrix XenServer virtualisation platform. It was selected for NetApp's advanced functionality such as snapshot capability, replication and ASIS de-duplication, which will eliminate the storage of redundant data even across customer systems whilst maintaining security and performance.
Gavin Thirlwall, Network EQ's Technical Direct or, said:
"NetApp's solution allows us to use Citrix's XenMotion technology for the first time and eliminate ...
[search all networkeq.co.uk news]

January 12, 2017 - The earlier incident is now fully resolved. If you are still having issues please call us or raise a support ticket.
January 12, 2017 - .. in order to restore service. Further updates will be posted on our status page at more info 3/3
January 12, 2017 - This was related to an earlier power outage at the data centre. Power has now been restored and we are working with remote hands 2/2
No official account on Facebook yet
https://www.linkedin.com/company/network-eq/
About: Network EQ specialise in hosted web and messaging services, run from two UK data centres.

NetworkEQ -vs-
1and1 IONOS UK

100%
We provide services for the web , calibrating tailor-made offers to develop, grow and support customers' digital activity. Hosting oriented services suitable for those who are at the beginning of their journey, and for those who need advanced plans to grow their business. The new DC2 Datacenter [...]
Neolo Total Reviews: 3
Average Rating: 7 / 10
Good Reviews: 2
Bad Reviews: 1
Official Responses: 0 Alexa Rating56,451▼-49,724

Things to do
✗ Company address is incomplete. Must contain: street, city, zip code and country
86%
Fast and stable servers distributed throughout the world, technical support in your language. Entrepreneurs, freelancers, individuals, agencies, companies, foundations and more. We are a team of professionals working every day so you can have the best Hosting service, your website working [...]
Change IP Alexa Rating89,126▲1,395

Profile completion status:
Things done
✓ Note: Company descriptions is short. Recommended 1000 chars
✓ Company address location is complete
✓ Company phone/fax is added
✓ Company Twitter and Facebook accounts are added
✓ "About page" URL or "Contact page" URLs are added
✓ Products (plans) are added, but some are not updated from over 2 years
Note: Add a promotion or coupon

100%
Wasabi makes saving data simple, affordable, fast and secure. Wasabi Hot Cloud Storage removes the complicated decision of where, how and whether to save your data, and empowers you to transform your business and organization through cost savings and disruptive speed and performance. As data more [...]
Trademarks, logos & names are properties of their respective owners and protected by law.