Masterhost is one of the first hosting providers and domain name registrars in Russia, appeared on the market in 1999. The company provides clients with professional services of placement and support of internet projects of any complexity.
We grew and developed together with the Runet, and our success is based on 5 key components:

Masterhost provides customers with a professional virtual and VPS hosting, maintenance of postal services, rent their own accommodation and client servers, registration and rent, SSL-certified domains. 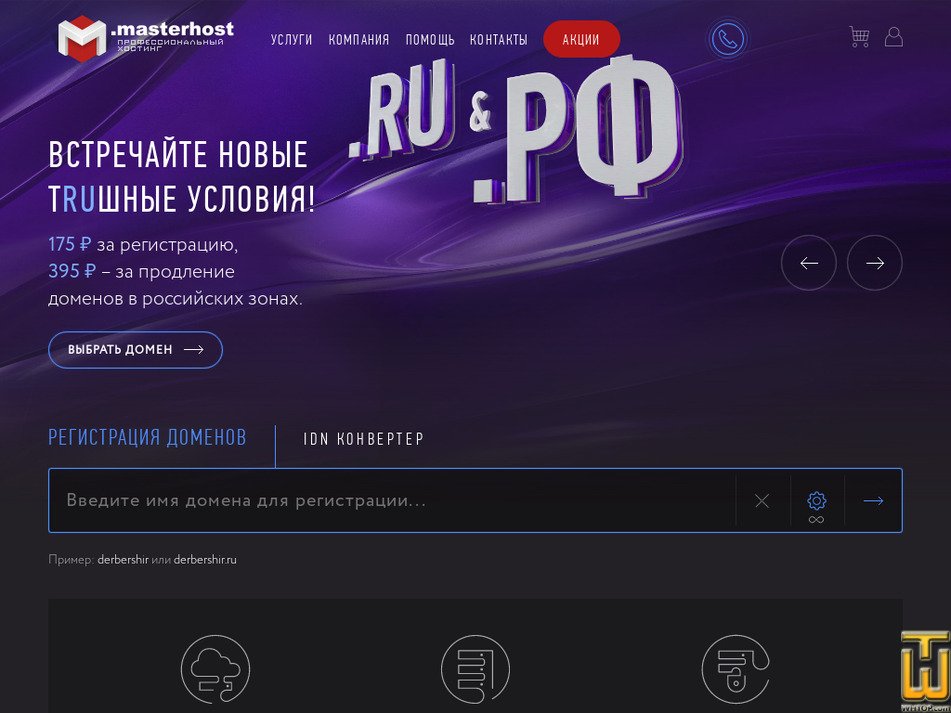 Website research for Master Host on November 26, 2019 by WebHostingTop

It seems the masterhost.ru website has Javascript error on main page, detected Nov 20, 2019

.masterhost Deploys SWsoft Solution - Server automation and virtualization provider SWsoft (swsoft.com) announced on Thursday that Russia-based Web hosting provider .masterhost (masterhost.ru) is offering new virtual private server offerings for Windows powered by SWsoft Virtuozzo virtualization software.
"We are pleased that .masterhost has selected SWsoft Virtuozzo software to offer a greater choice of services for all its customers, whether they are a large enterprise, small to medium-sized company or an individual," says Kurt Daniel, senior VP of marketing, SWsoft. "In addition, .masterhost and its customers will benefit from continued innovation through our Open Fusion technology initiative to advance an open platform for
Masterhost Deploys SWsoft Products - Russian Web hosting provider .masterhost (masterhost.ru) announced on Wednesday it has selected SWsoft (swsoft.com) Virtuozzo virtualization software and Plesk control panel software to manage its services. The products will help .masterhost expand its offerings on both the Windows and Linux platforms.
The Web host had initially selected Virtuozzo to maximize its server resources, then added Plesk because of its integration with Virtuozzo as part of SWsoft's open fusion initiative. Virtuozzo lets multiple virtual environments on a single server share hardware, licenses and management resources.Virtuozzo and Plesk also have a common API for changing the language and locale of integrated ...
[search all masterhost.ru news]

No statuses until now in EN!

https://www.facebook.com/masterhost.ru/
Masterhost account is having 349 likes, talking about them 9 peoples. Last activity on Sep 27, 2019.

Things to do
✗ Twitter account is missing
✗ Forum, Blog/Announcements, Knowledgebase or FAQ URLs are missing
71%
Metrabyte Cloud Company Limited has been in business for more than 10 years.We have our own IDC located on the 18th floor, CAT Tower, Bangrak, providing Cloud Hosting , Cloud VPS , Colocation , Dedicated Server and ICT Solutions with a subsidiary of Metrabyte. Data center Co., LTD and [...]

Things to do
✗ Twitter and Facebook accounts are missing
✗ Forum, Blog/Announcements, Knowledgebase or FAQ URLs are missing
71%
For over 20 years we have been focusing on and developing internet services. Aim to expand its service to cover all over the country continuously. With a one-stop service and expanding channels of use The unity of technology and leading-edge service Until it has gained the trust of many [...]
SERVER1.ge Alexa Rating0

100%
Chaiyo Hosting Company Limited, we are the leader in providing Web Service, E-Marketing Service and System Customization and Integration Service. All needs of all types of SMEs with the objective of providing businesses Benefit from information technology That is changing rapidly all the time, [...]
Storm.ca Alexa Rating1,253,123▲209,177

Things to do
✗ Forum, Blog/Announcements, Knowledgebase or FAQ URLs are missing
86%
Storm Internet Services is not your regular internet company. We have a strong commitment to each and every one of our customers, a local call center, and professionally trained technicians. Learn more about us below! Storm opened its doors in Ottawa in June 1996 and was originally founded by four [...]
Trademarks, logos & names are properties of their respective owners and protected by law.