ITDC is a group of professional programmers, designers, and IT experts. ITDC works on the IT market since 2001 and is specialized on three main sectors. 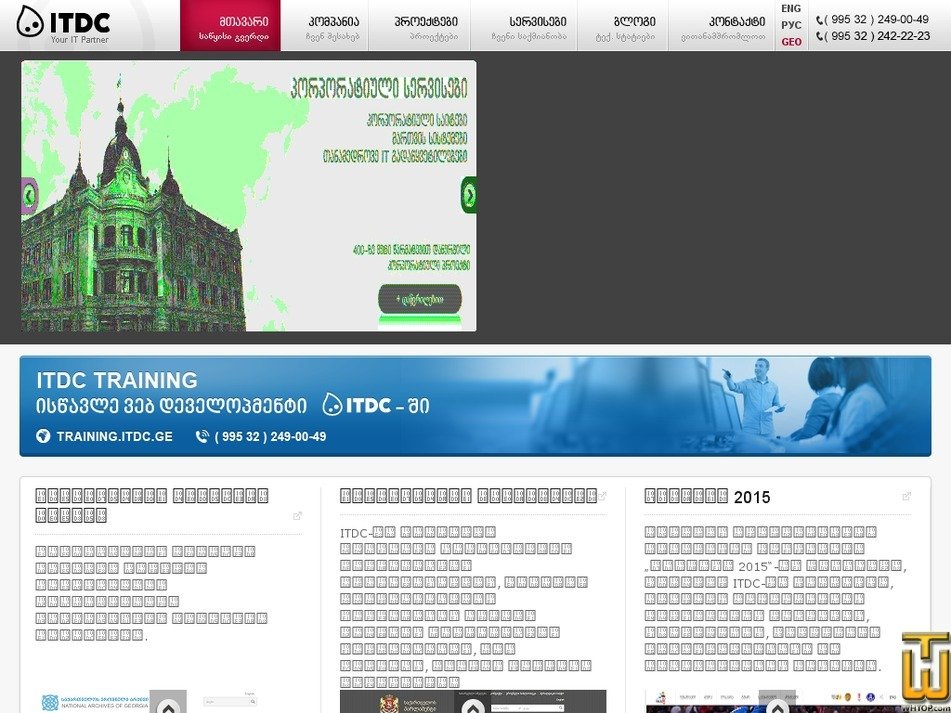 https://www.linkedin.com/company/itdc
itdc.ge Blog  (RSS error) First post from December, 2008, with total 10 articles, Language ka-ge (real language en). See recent blogs summary posts:
June 8, 2010 - The Administration of the President of Georgia - ITDC developed a new web site for the President of Georgia. New web site was created using all of the modern international standards and is one of the best in European leaders' sites. Visit ...
June 4, 2010 - Central Election Commission of Georgia - On the new web site for Central Election Commission of Georgia, visitors will get detailed information about elections, rules and even check the count of one's own vote. Election results can be seen ...
May 8, 2010 - Night Show Studio - The web site for Night Show Studio is as much fun as the project that people know them by. Each of the project has it's own visual interface and informations.
https://www.crunchbase.com/organization/information-technology-development-center

Things to do
✗ Company descriptions is too short. Minimum 500 chars
86%
Xcobean uses a combination of Speed, Innovation, creativity and a wide range of technologies to make you grow. We provide all the tools you need to automate your business so that you attain efficiency and effectiveness in achieving and satisfying your set expectations with much ease.

100%
We can create your private Cloud with VPN access to your servers so that you have all the security guarantees. Safer than having the application server in your offices More than 300 extensions of territorial domains in the 5 continents.
Gigas Alexa Rating461,846▲182,344 Domains497▲2

Things to do
✗ Company descriptions is too short. Minimum 500 chars
86%
Gigas offers one of the best platforms on the market for cloud hosting; it is flexible, scalable and easy to use. In the case of any contingency it ensures the continuity of your business. We replicate your server-to-server infrastructure and use a pay-as-you-go model.
digival.es Alexa Rating570,947▼-334,587

100%
How Tekno started in 2015 as a tech blog. In early 2019 we noticed a need for reliable web hosting to the Middle East, Europe, and around the World. So we starting offering web hosting to SMEs and young entrepreneurs. We seek the absolute best for our customers that is why we use cPanel to provide [...]

Trademarks, logos & names are properties of their respective owners and protected by law.