Average 3 out of 10
Total reviews: 9
Recommended by: 2
Opposed: 7
Official responses: 1

Located in the heart of downtown Portland within the Pittock Block (PDXNAP), DirectSpace offers a high class, secure, redundant, and private data facility with a massive network infrastructure and capacity. We are committed to providing top notch, enterprise level hosting services abroad at an industry leading price. We opened our doors in 2001 and have grown to serve more than 1,000 dedicated, colocation and virtual customers within our privately owned data facility. 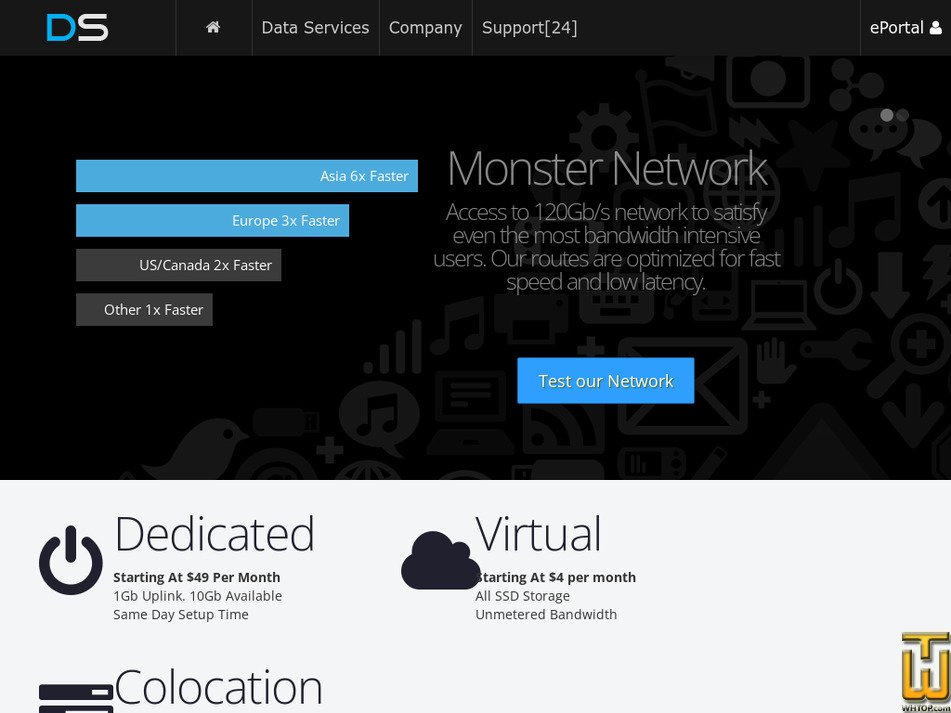 Website research for Direct Space on February 27, 2021 by WebHostingTop

February 25, 2020 - cloud008.pdx is now operational and all services are online.
February 25, 2020 - We're currently experiencing downtime on our cloud008.pdx node. We're working to have this resolved momentarily.
February 17, 2020 - We’ll be performing maintenance on ePortal this evening from 8 PM to 12 AM PST. During this time, ePortal will be i… more info
https://www.facebook.com/directspace/
DirectSpace Networks | PDX account is having several likes, talking about them very few people. Last activity on Jun 6, 2018. Recent posts:

Jan 9, 2017 - All new KVM infrastructure launch in Los Angeles on 1.29.17! Pre-Order today and get 2 months of service free!
Feb 24, 2015 - New Unmetered plans added in Portland. Los Angeles coming soon. ;)
Nov 1, 2014 - In celebration of our new LAX-1 DC launch in December, we’re once again offering a second year free with the purchase of the first year. This offer is available now through the end of the month. All dedicated, colocation and VPS services are eligible. Simply ...
No official account on Linkedin yet
No official Blog yet

The quick stats of Direct Space profile shows a note average of 3.0 out of 10, counting 9 opinions. (few listed on the top of the page)
As visitor you can rate this provider directly here! If you are part of support team, you can respond to these reviews by going to login

simon (simonhuang301@g...)
Time Hosted: 6 mo. to 1 year
Global rating
Directspace.net has very poor service. I purchased a product from them and find it hard to use and then cancelled it the day i received it. When asked for refund, their sales man said that they do not offer refund past their 3 day service warranty. But the fact is that i made the cancellation almost the same day i received the product. I wrote many emails to them in the past 2 months even with the title"Complaint to your service" in my email. But they don't care about that. They are a compnay without trust and never keep their promise!!!Think it over before you have any deals with them.
66 out of 68 users found this review to be helpful!
Did you find this opinion useful? YES / NO
-anonymous- (-no email-)
Time Hosted: 1 to 3 months
Global rating
Features
Cost
Customer Relation
Control Panel
directspace.net is worst!
Terrible Uptime/Hardware

READ THEIR SLA FIRST TO UNDERSTAND THE PROBLEM

It's Greet,
I Plan my site Hosted On DirectSpace For Long Time

Watermelon Web Works
These Direct Space customer review(s) and ranks are the subjective opinion of our visitors and not of whtop.com staff.
Trademarks, logos & names are properties of their respective owners and protected by law.