DataHive.ca was founded in 2002 to service the needs of media developers by providing affordable, powerful shared web hosting packages. Over the past year, DataHive.ca has tailored their services for the growing needs of their clients. It seems that shared hosting just isn't enough anymore. On February 2003 they launched their brand new site, with new advanced services to accomodate even the most specific client's needs. In the early part of 2005 they brought their customers more functionality, extra features and additional services. 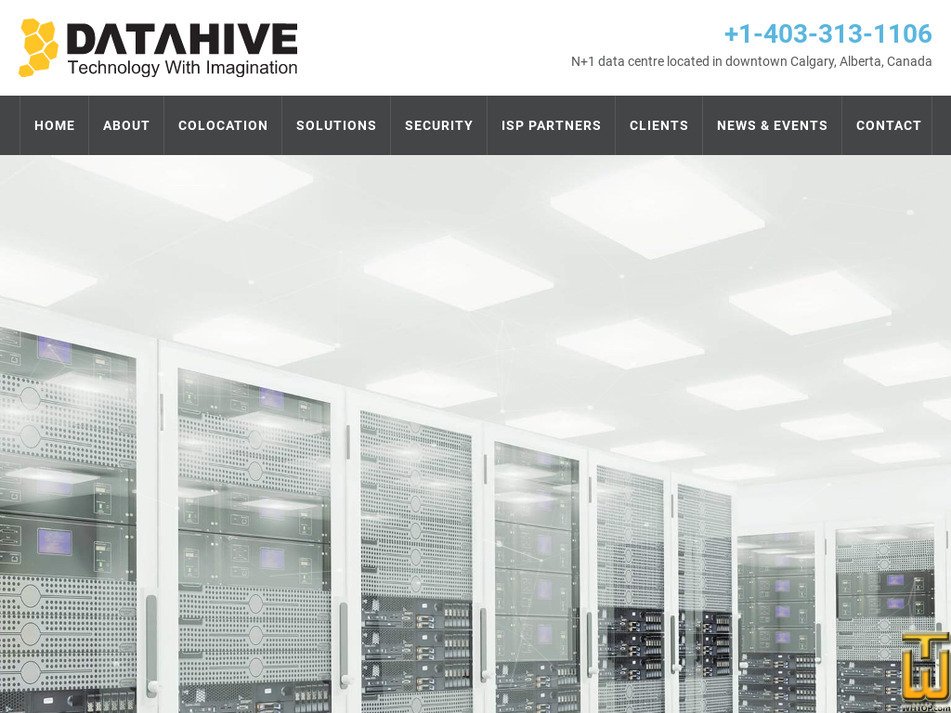 February 7, 2017 - Is your biz in the U.S.? How BackupUrData backs up your #data safely and affordably in #Canada more info #datasecurity
February 6, 2017 - What are the real cost saving benefits of #virtualization with DataHive? #YYC more info #data #CTO more info
No official account on Facebook yet
https://www.linkedin.com/company/datahive/
About: DataHive provides the most efficient and cost-effective way to manage your IT solutions. DataHive offers secure, affordable data centre space featuring colocation, managed services, virtualization, and private cloud computing. Our highly secure, world-class data centre is located in downtown Calgary, Alberta, Canada — one of the most geographically safe locales in the world.

Whatever your data centre, colocation, virtualization or managed services requirements, DataHive can provide a secure cost effective solution that enables you to concentrate on your core business free from the responsibility of running a data centre.
DataHive (established 2003) is a Privately Held entity having 37 followers on LinkedIn and 2-10 employees, industry Information Technology & Services.
http://blog.datahive.ca/  (RSS error) Blog added on August, 2012, with total 10 articles, Language en-US. See recent blogs summary posts:
November 15, 2013 - Alberta’s Internet Pricing Breakthrough - DataHive wants to share some news that is changing Alberta's technology landscape forever. Being on the Internet is something most people take for granted until it slows down and the video we are ...
July 17, 2013 - Historic Floods of 2013 - When I left DataHive on June 20 to go home, the weather was rainy but I did not anticipate the severity of what was to come in the next 12 to 24 hours. I suppose nobody did. Less than three hours ...
June 27, 2013 - DataHive’s Data Centre Untouched by Calgary Flood - “Not one single piece of equipment in our data centre was affected by this ‘flood of the century'. There was no down time, no data loss, no impact upon our clients,” stated Marjorie Zingle, CEO of ...

100%
Crown Hosting® Services First established in 2004, Crown Hosting® have many years of experience with business and personal websites of all sizes and have built up a wealth of web hosting, domain registrations and email expertise that puts us way above other hosting companies. crownhosting.co.uk is [...]
Esteem Host 👉 Total Reviews: 9
🙌 Average Rating: 6.4 / 10
👍 Good Reviews: 6
👎 Bad Reviews: 3
👈 Official Responses: 0 🏆 Alexa Rating 898,351▼-12,634

Profile completion status:
Things done
✓ Note: Company descriptions is short. Recommended 1000 chars
✓ Company address location is complete
✓ Company phone/fax is added
✓ Company Twitter and Facebook accounts are added
✓ "About page" URL or "Contact page" URLs are added
✓ Forum, Blog/Announcements, Knowledgebase or FAQ URLs are added
✓ Products (plans) are added, but some are not updated from over 2 years
Note: Add a promotion or coupon

100%
Esteem Host is focused on managing hosting solutions for customers, from simple web servers to complex online applications and email solutions. We give our customers the confidence that enables them to forget about their online infrastructure by providing support driven services for their hosted [...]

Profile completion status:
Things done
✓ Company address location is complete
✓ Company phone/fax is added
✓ "About page" URL or "Contact page" URLs are added
✓ Forum, Blog/Announcements, Knowledgebase or FAQ URLs are added
✓ Products (plans) are added, but some are not updated from over 2 years
Note: Add a promotion or coupon

Things to do
✗ Company descriptions is too short. Minimum 500 chars
✗ Twitter account is missing
71%
Our shared website hosting plan is the quickest and most affordable way to get your website online. CooliceHost is a hosting provider, compiled by a team with many years of experience in this field One of our main goals is to make our customers feel like they are in a safe hands and have chosen [...]
HostMeNow 🏆 Alexa Rating 7,765,891

Things to do
✗ Company phone number/fax is missing
86%
HostMeNow, Best Web Hosting provider! offering unlimited Secure, Flexible and High Performance Cloud packages with SSD disks & free SSL certificates. We provide a super fast affordable web-hosting services - Together we help you put your dreams online and turn them into reality We are an England [...]
Trademarks, logos & names are properties of their respective owners and protected by law.