we create high quality websites for 14 years now
over 140 websites and web applications created
we don't play with WYSIWYG editors like others - we write our own source-code
we make fast, usable websites, always delivered on time, friendly with search engines and humans
100% valid XHTML & CSS websites 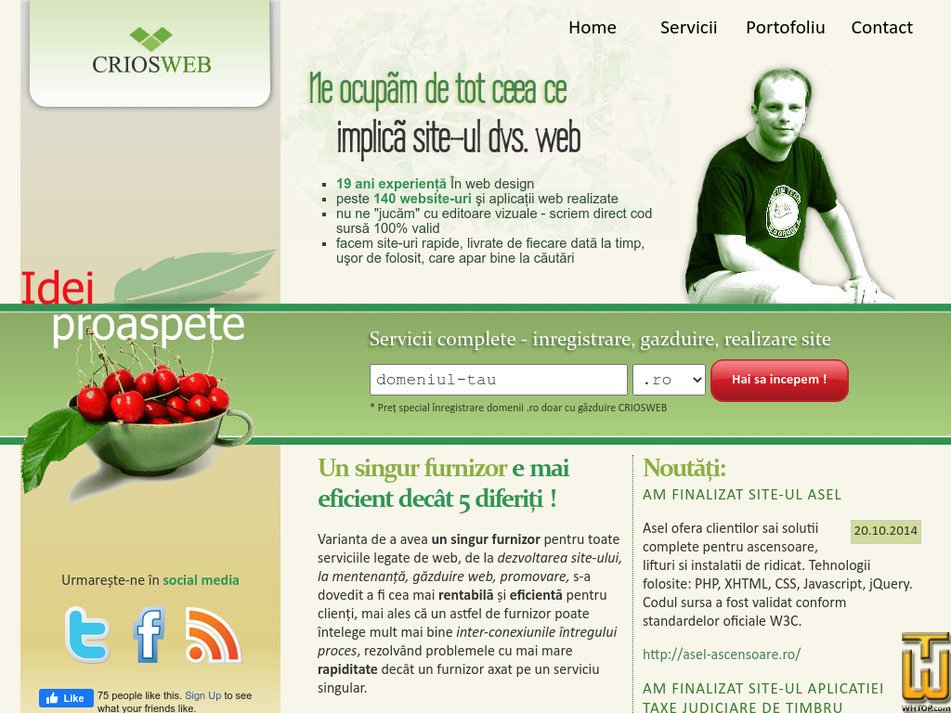 Website research for Crios Web on September 29, 2016 by WebHostingTop / whtop.com

https://twitter.com/criosweb
Account started from April, 2010, having already 10 tweets with 9 followers and 3 friends. Last activity on June 19, 2012. See recent tweets:
June 19, 2012 - I love Dropbox because it's simple and fast http://db.tt/9qIdEc2g
January 12, 2011 - [RIOT] RIOT 0.4.5 is available http://goo.gl/fb/jD4SD
October 19, 2010 - [RIOT] RIOT 0.4.4 released http://goo.gl/fb/4uoQu
https://www.facebook.com/CriosWeb-140427966004637/
CriosWeb account is having several likes, talking about them few people. Last activity on Oct 16, 2014.
Language ro
No official account on Linkedin yet
http://www.criosweb.ro/en/index.php  (RSS error) First post from March, 2010, with total 6 articles, Language en. See recent blogs summary posts:
April 25, 2011 - Plasticom website was finalized - Our old customers, the company Plasticom from Titu, Romania, wanted to create a brand new website, to upgrade the old one, created by us in 2004. Meanwhile, the technology evolved, we gained more ...
March 17, 2011 - StampaTrans website has been finalized - A STAMPA is on the road all year round covering all major routes within Romania and throughout Europe, especially Romania-Italy routes and return. The website is available in two languages: ...
October 27, 2010 - We have finalized the Pavigil website (Spain) - Using a relatively new technology - that of imprinted concrete - which is enjoying great popularity in Spain, Pavigil offer these services in the Valencia area. This site presents in a clear and ...

100%
DATATAN.NET established the services since 2004 with the initial purpose to be an information source for website makers. Later in 2005, we had the idea to create services to meet the requirements of website makers. Therefore, we started with our qualified services of Web Hosting and Domain Name [...]
OrangeLemon Total Reviews: 1
Average Rating: 10 / 10
Good Reviews: 1
Bad Reviews: 0
Official Responses: 0 Alexa Rating0

Things to do
✗ Forum, Blog/Announcements, Knowledgebase or FAQ URLs are missing
86%
Your website is very important to your business. Whether you have a large webshop with thousands of customers or one page with contact information. Once online, your site should just keep running. So that you don't have to worry about that. We make sure your site stays up and running. For a decent [...]
MySVN Alexa Rating0

100%
Offshore Hosting powered by NVMe SSD drives. Get protection against illegitimate use of DMCA. We keep your servers online no matter what. Flaunt7 is a web hosting provider that promises plans equipped with rich features, backups, free migrations and the possibility for customers to contact support [...]
DeployLab.eu Alexa Rating10,558,628

Things to do
✗ Forum, Blog/Announcements, Knowledgebase or FAQ URLs are missing
✗ Products (plans) are missing
71%
Deploylab.eu is a cloud service provider. The company is based in Belgium and delivers its services across Germany, France and the Netherlands. Deploylab.eu offers a multitude of services such as Windows and Linux instances, dedicated servers, web hosting, domain names, web hosting, email services [...]
Trademarks, logos & names are properties of their respective owners and protected by law.