ketan (ketan@g...) / notworking
⏳ Time Hosted: under 1 month
Global rating
Features
Cost
Customer Relation
Control Panel
😠 worst service
not providing me server and charge 2 time and even they not resolve my ticket from last 2 month so many times i request for refund but still they not giving me replys or any thing
👍 72 out of 👉 82 users found this review to be helpful!
Did you find this opinion useful? 👍YES / NO👎
MORE REVIEWS

🔃 ChicagoVPS is part of Deluxe Corporation
🔧 Services: Web HostingDomain Registration
⇔ Redirected from 123systems.net vortexservers.com
🔃 This company is a reseller of Colo Crossing

ChicagoVPS is a hosting company who has been bought by VSNX in 2015. The servers of the company are backed by Premium Data Center Footprint. ChicagoVPS is mainly known for the virtual private servers it offers.

ChicagoVPS also offers hosting for applications, such as: WordPress, Joomla, Drupal or Magento.

Shared Hosting packages are designed for both company owners and individual businesses. ChicagoVPS provides free setup and free migrations for the purchase of one of their plans. One shared hosting plan includes DDoS mitigation, firewall and threat management, as well as daily backup implementation for a better data protection.

Their prices are really affordable when compared to other popular hosting companies.

ChicagoVPS provides 99.9% uptime guarantee like the majority of hosting companies in the industry.

ChicagoVPS headquarters are located in Western New York. However, customers can choose server options available at all the six locations ChicagoVPS owns: Chicago, Los Angeles, Buffalo, Atlanta, Dallas and Piscataway. The company has a great power distribution as their data centers are all N+1 redundancy (minimum). All servers have their own secured cabinets.

At ChicagoVPS, customers can choose tech support from the following options: - Submit a ticket; - Contact by phone, e-mail or live chat; For extra information and help, customers have access to the following: - Knowledgebase; - FAQ; - Blog; ChicagoVPS promises premium network support assured by professional technicians and qualified staff. Their support runs 24/7/365. According to various testimonials and reviews given by customers, ChicagoVPS support is generally helpful and responsive.

ChicagoVPS provides customers with an easy-to-use control panel with a simple user dashboard.

ChicagoVPS is a top-notch company with great variety when it comes to VPS options and not only. Hosting packages include good resources in order to keep good maintenance and protection of servers.
Pros:
- Great prices;
- Good tech support and documentation;
- Satisfying performance;
Cons:
- Some customers might be displeased by the fact that ChicagoVPS does not provide cPanel/Plesk (these being the most popular control panels on the market); 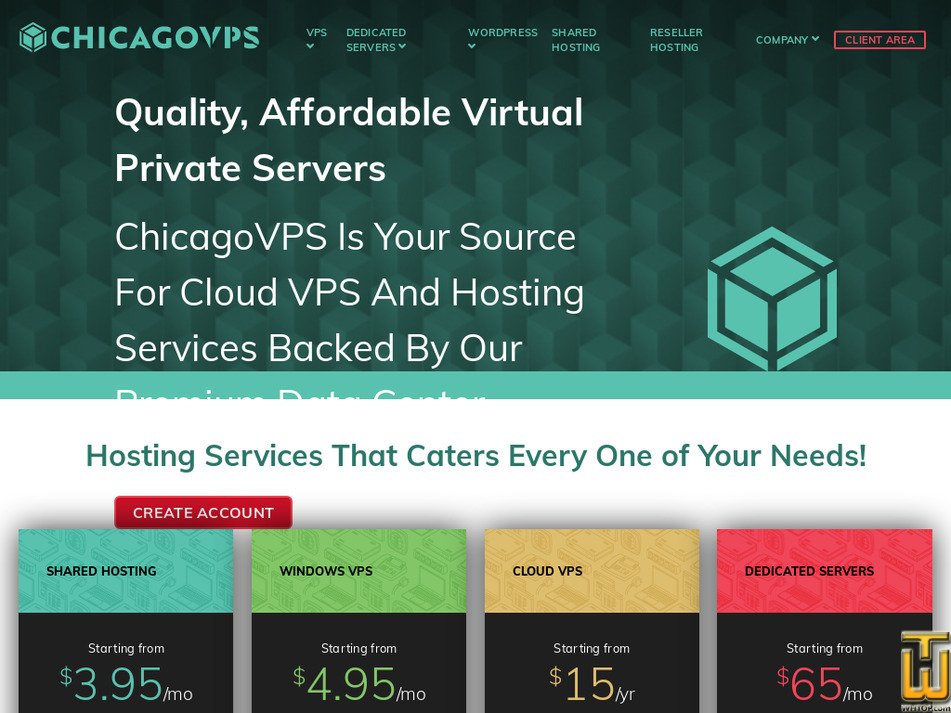 July 26, 2019 - Be sure to check out our end of July Flash sale, details provided on LowEndBox @ more info
May 31, 2019 - Today is your LAST CHANCE to take advantage of this sale! Use the code "MEMORIAL19" at checkout to redeem your 20%… more info
May 29, 2019 - Install Outline on your VPS more info
https://www.facebook.com/chicagovps/
About: VPS and Dedicated Servers
ChicagoVPS account is having many likes, talking about them several people. Last activity on Aug 21, 2019. Recent posts:

Aug 21, 2019 - Be sure to check out our end of July Flash sale, details provided on LowEndBox @ more info
Jun 15, 2019 - Today is your LAST CHANCE to take advantage of this sale! Use the code "MEMORIAL19" at checkout to redeem your 20% SITEWIDE discount! more info #hosting #vps #managedvps #windowsvps #linuxvps #wordpress #webhosting
May 29, 2019 - Install Outline on your VPS more info
https://www.linkedin.com/company/chicagovps/
ChicagoVPS (established 2009) is a Self Owned entity having 31 followers on LinkedIn and 2-10 employees, industry Information Technology & Services.
ChicagoVPS Blog  (RSS error) First post from March, 2018, with total 28 articles, Language en-us. See recent blogs summary posts:
August 1, 2019 - The New ChicagoVPS Affiliate Program - Affiliate or referral marketing is one of the oldest forms of online marketing that allows you to promote products and services on your website and receive commissions for sales that occur. However, ...
May 29, 2019 - Install Outline on your VPS - Securing your connection to the world wide web is important, especially considering that there are open Wifi hotspots everywhere that let you browse without using your mobile data plan. How do you ...
April 26, 2019 - Better at the Terminal - In spite of running a full GUI Linux Mint desktop, there are many commands that I am more comfortable running from the command line. I am pretty sure it helps me to manage my VPSes better. This ...

The quick stats of ChicagoVPS profile shows a note average of 1.0 out of 10, counting 2 opinions. (few listed on the top of the page)
As visitor you can rate this provider directly here! If you are part of support team, you can respond to these reviews by going to login

-anonymous- (wszhangxuan@g...)
⏳ Time Hosted: 6 mo. to 1 year
Global rating
😠 They suspended my service without any notification. And then they keep billing me for another month and refused to refund my money...

Avoid this VPS provider!
👍 52 out of 👉 57 users found this review to be helpful!
Did you find this opinion useful? 👍YES / NO👎

Kamatera
These ChicagoVPS customer review(s) and ranks are the subjective opinion of our visitors and not of whtop.com staff.
Trademarks, logos & names are properties of their respective owners and protected by law.