The anyNode team has a history spanning nearly 15 years in the hosting industry. With our years of experience, our administrators are able to provide world-class service for a fraction of the price of traditional hosts.

When it comes to hosting, nobody enjoys a slow connection. anyNode ensures only the best for customers by building our network infrastructure from the ground up. We fully own and operate our own enterprise-grade switching with redundant 10Gbps uplinks all the way to our powerful routing fed by 10Gbps circuits with Tier-1 carriers and Internet exchanges, ensuring our globally routed BGP network has great performance. 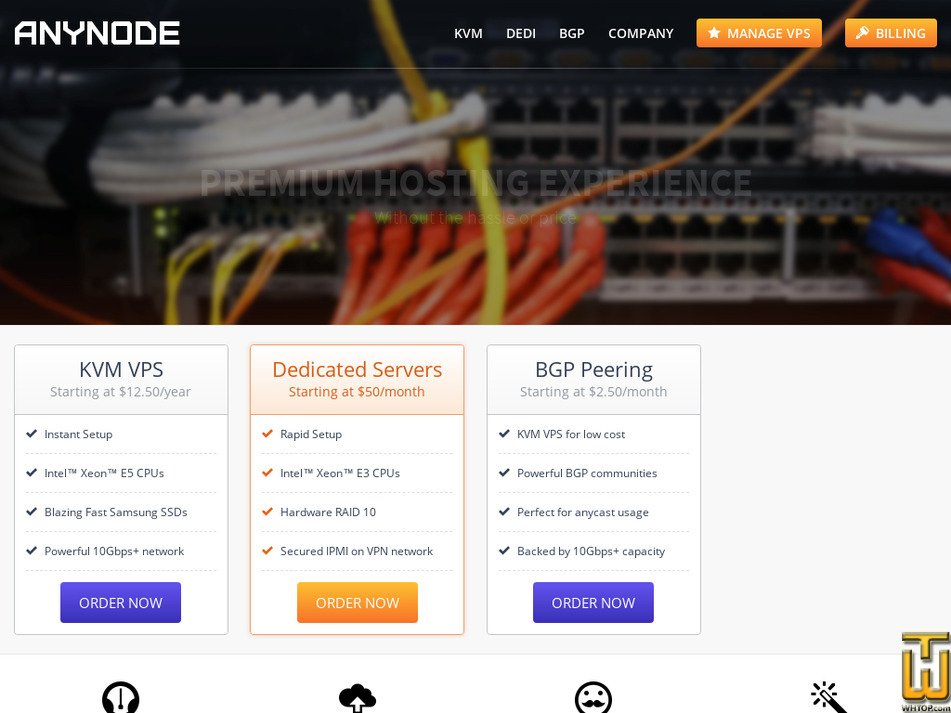 Marketing information is managed by support@h... [login]
Claim this business

Dialpoint Acquires Hostigation Assets - Telecommunications provider Dialpoint Communications announced on Thursday it has completed the asset acquisition of colocation and Web hosting provider Hostigation (hostigation.com).
Dialpoint says it plans to expand Hostigation's product lines and distribution capabilities to strengthen Dialpoint's position in the colocation and Web hosting markets.Once the transaction is completed, Dialpoint says it will issue unregistered shares of its common stock totaling 333,334 shares. The certificates representing the shares of common stock will have restrictive legends. Additionally, Hostigation customers will not see any changes to their existing service plans or rates."We are very pleased with the acquisition of Hostigation.com," says Billy Radford, president of Dialpoint Communications. "This transaction will allow Dialpoint Communications to not only extend its product offerings but also add to network diversity by bringing two operational data centers into the company's network ...
[search all anynode.net news]

April 24, 2019 - Court Says Using Chalk On Tires For Parking Enforcement Violates Constitution more info
June 27, 2017 - I'm saving at the pump with the Fuel Rewards program and you should too! @AskLyft why do I not get 7 cent discount so often?
November 16, 2016 - Seems Stripe dropped Alipay more info
No official account on Facebook yet
No official account on Linkedin yet
http://hostigation.com/blog/  (RSS error) Blog added on September, 2015, with total 9 articles, Language en-US. See recent blogs summary posts:
November 24, 2015 - Break the reboot cycle with KernelCare - Break the reboot cycle with KernelCare KernelCare is a new great service, which provides important updates for the running kernel, eliminating the need to reboot Linux servers. Rebootless kernel ...
September 25, 2015 - Secure your Linux system - Secure your linux system by running sshd to not accept password authentication and have it listen to some port other than the default or 22. First thing is to move sshd to listen to another port ...
September 18, 2015 - Generate Certificate Signing Request in cPanel and get Free Trial Comodo PositiveSSL certificate - Say you would like to add an SSL certificate to your web hosting/site but just don't know how?If your host uses cPanel as your control panel, this article will take you from generating the signing ...

100%
Arahoster for web hosting offers free CDN, SSD disks, DDOS protection, 24/7 support & MORE, so YOU can dream big! Arahoster started in 2017 to offer shared hosting services in the Middle East market. In 2018 we expanded our services to include virtual servers and Email hosting. We also provided a [...]
Frantik Alexa Rating0

Profile completion status:
Things done
✓ Note: Company descriptions is short. Recommended 1000 chars
✓ Company address location is complete
✓ Company phone/fax is added
✓ Company Twitter and Facebook accounts are added
✓ "About page" URL or "Contact page" URLs are added
✓ Forum, Blog/Announcements, Knowledgebase or FAQ URLs are added
✓ Products (plans) are added, but some are not updated from over 2 years
Note: Add a promotion or coupon

100%
Frantik (Web Technologies) No job too big or small. We are long established and are proud to offer no nonsense and hassle free web hosting for everyone. Need a domain name too with your unique and personal web presence? Get in touch! Need a blog, or an eshop? We can help! Need an email address [...]
Colossus Cloud Total Reviews: 1
Average Rating: 1 / 10
Good Reviews: 0
Bad Reviews: 1
Official Responses: 0 Alexa Rating3,560,939▲2,345,879

100%
Our family started in the mid-1990s as developers of software for the “web”, something that was relatively unknown back then. But we knew right from the start that the Internet would change everything. As we needed servers to host the applications we developed for our clients, the idea of a [...]
cloudnet.se Alexa Rating6,785,077

Things to do
✗ Facebook account is missing
✗ Forum, Blog/Announcements, Knowledgebase or FAQ URLs are missing
71%
Cloudnet started as a side project when the founders of Cloudnet, Anders and Magnus, hosted their own and friends' websites in the early 2000s. The company was officially founded in 2010 and has since grown to become Sweden's largest managed hosting company that only works with Linux. Right from [...]
Trademarks, logos & names are properties of their respective owners and protected by law.