.ca has been added on February 9, 2022, Aggregate Rating (1 out of 10 from 1 reviews)
OverviewProductsUser Reviews 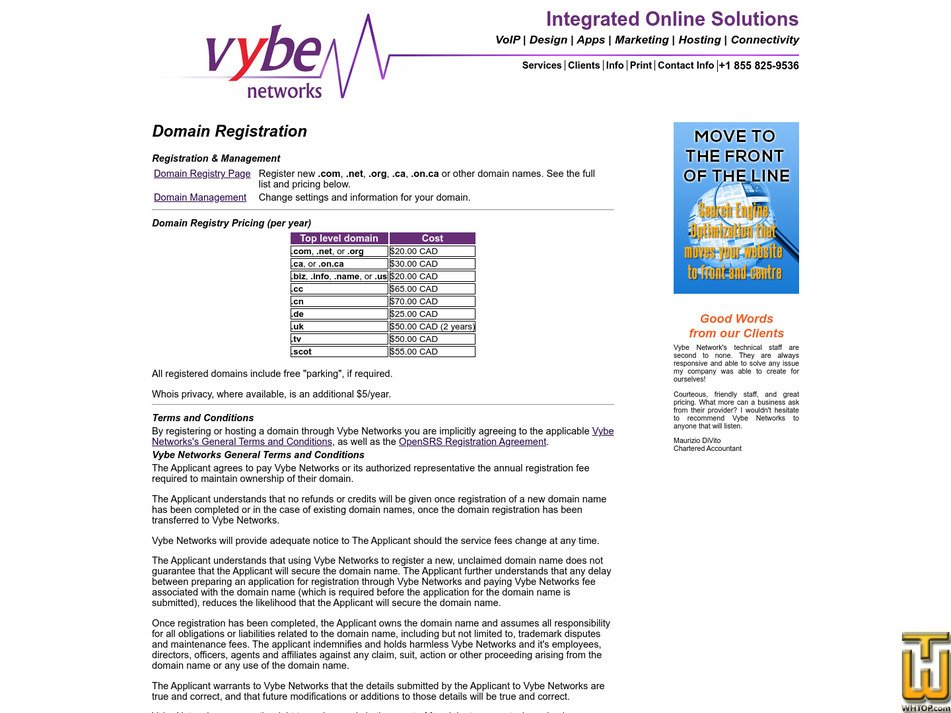 -anonymous- (-hidden-) / ardentmanagement.ca
Time Hosted: over 3 years
Global rating
I feel it necessary to inform others how particularly bad your internet hosting company is. The company, originally called Vex.net, was run personally by the owner and his wife (The Cains). They were always available to help when issues arose. Unfortunately, he wished to focus more on development and we were presented with VybeNetworks.com.

VybeNetworks has rude, ignorant (in both senses of the word), unhelpful staff. Except for their after hours DSL support (great team there at Coliseum Online) they are usually unavailable and at times take days to reply to you. The Cains answered the phone every time, but for the past few years no matter which department you choose from the menu (2 - sales and 4 - market are the same person and 3 - support which is one of two people alternating and neither seems to answer, even when the person in sales tries to reach them) you almost always end up leaving a message that rarely if at all gets replied to.

Over the years, the company has repeatedly lost domains that I set up through them (and they refused to let me have control over) through mismanagement. Recently, I decided to give them another chance. I advised my boss to get web hosting and email service through Vybe. Over the past week and a half they were supposed to port a mobile phone line for us and have not completed the job a number of times for various reason as it takes days to do it. Last week, after two attempts,he told me I would have to pay them extra to do the job (which is illegal under CRTC guidelines). Earlier today their agent just did not bother to even try to complete the transfer, and called it 'cancelled'. When I contacted sales, Jim was very rude to me (on the phone) saying that they had tried 25 times. I can see now the four requests they have made, and when I said it had only been done three times, he hung up on me.

When I sent an email saying that there was no reason to be rude to me and that they their agents had made an error, Jim cut our email service off just for spite. He said we had not paid our account, even though:

1) they made a mistake in setting up our account and failed to charge my debt card, which I provided to make the payment,

2) when I brought this to their attention to support, no one did anything to arrange the payment,

3) my wife called them two weeks ago and the account department could not even find us in their system, and so did not take the payment,

4) again today when my wife called, accounting said that they have no record of us having an account with them,

and yet, Jim sent me an email complaining that we have not paid the account (we owe $120) for the upcoming year.

In the past, on two occasions, we have had internet through them. It was of very poor quality (speed and wireless connection were not good). The company was based in a home in East York, but is now in a building in downtown Toronto.

I certainly miss The Cains.
65 out of 71 users found this review to be helpful!
Did you find this opinion useful? YES / NO