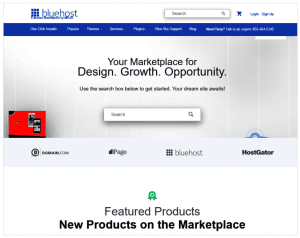 Company: Blue Host
Want to add a website news or press release ? Just do it, it's free! Use add web hosting news!

Designed with non-technical customers in mind, MarketGoo's tool would enable any website owner to help grow their business by optimizing their site for higher search rankings and more traffic on search engines like Google.

Designed with non-technical customers in mind, MarketGoo’s tool enables any website owner to help grow their business by optimizing their site for higher search rankings and more traffic on search ...
Aug 8, 2018 - Endurance International Group Narrows Loss in Q2 2018 - The Endurance family of web hosting services brands includes Bluehost, HostGator, Domain.com, Constant Contact, and SiteBuilder, among others. Headquartered in Burlington, Massachusetts, Endurance International Group (endurance.com) employs over 3,500 people across the United States, Brazil, India, and the Netherlands. Net loss for the company's second quarter of 2018 was $2.0 million, compared to net loss of $39.1 million for the second quarter of 2017.

In addition to cutting these jobs, the company is expanding in Tempe, Arizona, which means 600 new jobs for that area. The 90 jobs getting cut in Austin represent nearly one-third of the staff for the company.

These 90 cuts are in succession to the 400+ jobs that were eliminated when the group closed a Bluehost office in Utah back in January. Directly afterward, EIG announced they would be expanding and hiring more employees in Tempe, Arizona.

Endurance International Group announced in an email statement the following:

“Shifting our resources and attention to centralize support is a long-term strategy for the benefit of the business and our ...